skip to main | skip to sidebar


The State of Colorado and the Colorado Historical Society have identified and evaluated eight potential sites for a new Colorado History Museum, and one of the options involves Denver’s Civic Center Park.


The City of Denver and the State of Colorado want to get stakeholder feedback on the desirability of this collaborative opportunity and solicit input on potential issues and opportunities including the organization of additional public processes.

Invite You and Members of Your Organization

RSVP to Helen Kuykendall at

The Colorado Historical Society and its representatives will detail their processes to date, provide an overview of the various locations under consideration, and describe the Civic Center opportunity and their conceptual programmatic ideas for a new Museum.

The City of Denver and the Civic Center Conservancy are eager for your feedback as to how this potential opportunity relates to the community’s goals of restoration and activation of Civic Center Park.

We look forward to your feedback on this idea and what issues and opportunities should be considered. All parties are committed to a public process which your input will help shape.
Posted by Friends of CC at 10:28 AM 74 comments:

As always, Civic Center Friends prints both sides of issues concerning Civic Center in our effort to inform the public. We have posted recent articles about Civic Center on the links column to the right. Take a look at recent articles from the Denver Post and Rocky Mountain News. Former City Council member Susan Barnes-Gelt's opinion piece, Putting "Civic" Back in the Center is listed under links and Mary Voelz Chandler's recent articles in the News will give some information on a proposal to move the Colorado History Museum to Civic Center Park. Post your comments here and let us know what you think.
Posted by Friends of CC at 3:56 PM No comments: Now is the time for all friends of Civic Center to visit the Farmers Market and Cafe, every Wednesday in the summer from 11-2. Buy fresh Colorado produce and specialty foods to take home. Stay for lunch from local vendors or just enjoy an iced coffee, fresh lemondade or a fruit drink sitting in bistro chairs in the shade of umbrella tables near the fountain. It is a great way to let the city know this is an important city asset that benefits from activities that encourage usage.
Posted by Friends of CC at 7:44 AM 4 comments: Read Kyle McMillan's article in the Sunday Post, A New Civic Center
http.denverpost.com/entertainment/ci_4881622
Posted by Friends of CC at 1:51 PM No comments:

Read the entire article published in the Sunday Denver Post. It is in the links column on the right under Denver Post.
Posted by Friends of CC at 11:38 AM No comments:

Time to Put Libeskind Ideas Away? More Ideas: A presentation on additional thoughts about the evolution of . We will continue to add visuals as we receive them. See the Denver Post article, Locals Add Voices to Civic Fix on the Denver Post links section, right column. drawings by William Wenk right, Steve Chuckovich, left
5:30 PM Wednesday December 6, 2006
Chris Frampton, from the board of the Civic Center Conservancy( CCC) introduced the program. He called Civic Center ( CC) " the heart of , the heart of , the heart of the West". The Civic Center Conservancy contacted Daniel Libeskind, who he described as one the “ four greatest thinkers on the built environment”.

He believes that the CCC brought the greatest amount of attention to beginning with the Aug. 30th presentation of Daniel Libeskind’s ideas to 2500 people at the . Dennis Humphries, CCC board member introduced the 9 presentations on the agenda.

David Tryba, of David Owen Tryba Architects, and a board member of the CCC began.

What Could the Park be? was the question posed by Tryba. He showed slides of the difference between , the part the state controls, that is in front of the State Capitol. Stressed attention to detail focusing on Dick Farley and Bob Root's design for the gathering place around the Veterans monument. Mentioned lighting, places to sit, trash receptacles. Discussed need for a “ common center”- particularly necessary in the months of the year when the flower gardens are not in bloom. Message the park conveys today is “ Keep moving” due to lack of benches and places to sit. CCC strongly believes in the better use of the McNichols building. "We shouldn’t be afraid of great modern design." He showed examples of locations throughout the world where modern architecture coexists with historic structures. Possibility of doing night lighting. Stressed use of local public art- showed Gladys Fisher sheep at Appellate court( former post office on 18th and Stout).

Yong Cho of Studio Completiva: “What if we can come up with a scheme that unites and clarifies the site?” Needs a simple clear central space. Tried to get at no elaboration but the big idea. Creating a central place and major relationship between CC building and Capitol. Several elipses with major access. strong shapes and forms- a series of ellipses. Shapes have symbolic meaning. His plan stressed connections to surrounding areas- including RTD, library etc. Very formal buildings ( capitol and CC building)- joined by an allee of trees.

Formal edge concept. What the opportunites and connections could be?
Importance of the East West axis in all original plans- showed Burnham Hoyt plan. Scale of original elements based on scale of built environment at the time ( mid teens of 20th c) Nature, scale and complexity of city has greatly changed and elements in the park are dwarfed by surrounding skyscrapers. Importance of connections and creating value of the space

Creating a “front door” in front of CC that would create a diagonal connection with cultural complex. Take into account new uses and what our collective idea of what the history of the city is.

CC is the heart of the city. Connectivity- you have to be able to get to the space. Bridge across Broadway and Lincoln. Use steps coming down from the capitol to access park with bridges in style of CC. Stay up high on bridge level with walkway slightly above Veterans memorial. Bridge would have places to sit. Proposed bridge from RTD across Colfax to in front of the state capitol. Another bridge connecting by Newspaper building to CC park. Steps going down into park are like an amphitheatre, with views west. Adds water features where flower beds are now. Create sculpture garden in open space opposite McNichols building.

Mentioned that Noel Copeland and Bob Root did most of the work on the Veterans Memorial.He listed activities: parades start or end there, festivals, political rallies, gardens, civic pride.Should there be more activity? Should that come first or access first? Should we change the “idea” fo the park?

First: change use of McN building and turn face towards CC not street.- museum, gallery, restaurant.

Create parking under lawns for access and convenience. Create underground passage- like the one in between CU and the hill.

Page Penk- graduate student at CU School of Design and Planning- Design and Planning create the at CC park- a seed bank of 6000 languages. Inspired by , . Sink Colfax. Proposes “ Codex Americana” with “Peace is Possible” in 6000 languages. Stones lined up along the central access between CC and capitol. Suggests large fountain in area by stones- suggested playground and community garden.Financing similar to what Christo did with the fences in . Individuals pay.

Randle Swan- the Cygnet Group. He is a historic preservationist, not an architect.

Architects like to do something very impressive- their signature. Voorhees Memorial- water feature, gardens in bloom, Suggests lighting structures at night. This is the most visited park in counting festivals. MCN building built in 1907- first piece built in park. Suggests three restaurants, bike and scooter parking area,Third floor could be exhibit space, meeting space. Could this be the museum of the history of ?

A great space because of its monumentality but not comfortable- no place to sit, not enough shade. How to introduce human element? Showed Jean Tingley modern sculpture in Beauborg with edge seating coexisting with historic architecture. Notion that different eras can work together comfortably. Issue of traffic calming- not just bridges and tunnels. Create pedestrian streets. Encourage festivals for civic coming together. “The green ribbon”- a trellis that provides shade and services- rest rooms, kiosks- include electricity so can use for festivals.

One of the first questions in the Q&A that followed asked why the CCC & Parks and Rec didn't provide comment forms ( as they do for the Libeskind ideas). CCC apologized saying, " they didn't think of it" and suggested using the Civic Center Friends blog to post comments. We want to hear your response and ideas on these concepts. Friends will forward all your comments to the CCC and the Department of Parks and Recreation.

The Seal fountain is working this summer! 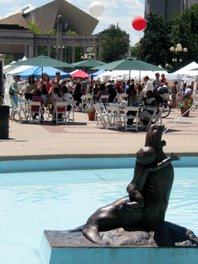 Seal fountain, designed by Robert Garrison with view of the Wednesday market 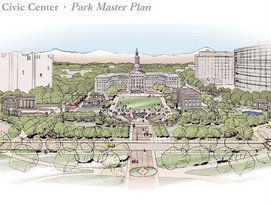 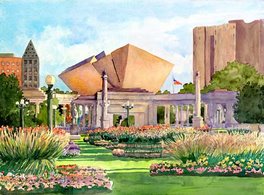